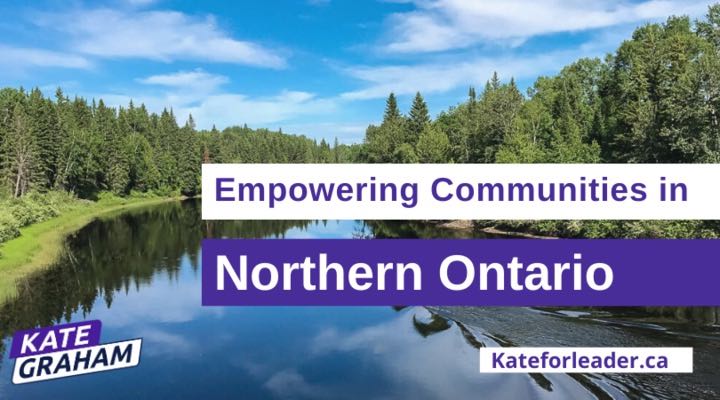 The Ontario Liberal Party needs to see Northern Ontario the way Northern Ontarians see it - with all of its challenges and opportunities. A provincial partner determined to address the needs of remote, rural and northern communities must ensure access to health care services, infrastructure, housing and opportunity. Without investing in basic services and supports, Ontario will continue to function as a two-tier province, where Northern Ontario is left behind.

A Northern Ontario Health Action Plan. It is unacceptable that a province as prosperous as Ontario has a two-tier health care system where some can access care and while others cannot. The barriers between people and the care they need means that far too often Ontarians go without care. In addition to our Cross-Partisan Health Plan, which includes universal pharmacare, our Northern Ontario Health Action Plan includes: immediate investments in mental health, improved access to appropriate and inclusive health care services, more health care resources and autonomy for Indigenous communities, and investments in long-term care.

Expand Broadband access across Ontario. While the world is talking about 5G, we are still talking about broadband. It’s an economic development issue, it’s a quality of life issue, and for many it limits access to critical services like health care. Connectivity is directly linked to the economic success of Northern Ontario and we are committed to working with public and private sector partners to ensure coverage. If somewhere in southern Ontario lost high speed internet, the problem would be resolved immediately. It’s time to stop Northern Ontarians as lesser than and invest in the future of Northern Ontario.

Develop a Rural Post-Secondary Strategy to get more young people the training and education they need. Young people from Northern Ontario, especially remote areas, are far less likely than those in southern urban areas to attend university, college, or receive training. Working with relevant partners, including Francophone, Indigenous, and community groups, we will find a more effective way forward. This Strategy will accompany a Post-Secondary for All plan, which includes free tuition for low and middle income families and an OSAP that better factors in the costs of relocating and commuting.

Invest in Northern Ontario roads, including the Forest Roads Funding Program. To boost Northern Ontario’s economy, improve road safety, and provide access to First Nations communities, we need to invest in roads. We are committed to returning Forest Roads Funding Program at $75 million. While we seek a 50/50 cost sharing model with the federal government on Trans-Canada expansion, we can complete other long-standing road expansion work. With federal funds now in place, we must complete the twinning of Highway 69 and the twinning of Highway 17 if those projects remain incomplete in 2022.

Prioritize projects that provide reliable power to Northern Ontario communities. Limited diesel power capacity is a major barrier for many remote First Nations communities. Projects like the Wataynikaneyap Transmission Project, which will connect 17 First Nations communities to the provincial electricity grid, should be central to reconciliation and confronting climate change. Coupled with investments in road infrastructure, connection to the grid will mean eliminating the challenges of fuel delivery for many First Nations. We are committed to seeing this project through and will be actively seeking partnerships to move forward with projects connecting other remote communities to the provincial grid.

Expand the Northern Ontario Energy Credit. The NOEC exists as part of the Ontario Trillium Benefit to help Northern Ontario residents with energy costs. As households across Northern Ontario struggle with energy costs, expanding this program and those that qualify for it will ease the burden on families. Right now, the program simply does not do enough to offset high energy costs nor does it help enough families. Upon taking office, a $10 million boost will mean more money for more Ontarians who need it most. The amount people receive will be tied to inflation going forward.

Build upon the Rural and Northern Immigration Pilot Program’s (RNIP). Immigration will remain key to economic growth in Northern Ontario and this program has real promise. The project’s goal is to attract new people to these communities to fill in labour gaps, which are growing as the population ages and the birth rate declines. Based on initial feedback on these pilots, we must work with the federal government to expand pilot areas and explore making the pilot programs permanent.

Empower municipalities to build transit and confront climate change. Increasing the Ontario Gas Tax Fund transfer from 2 cents to 6 cents a litre will mean $800 million per year for public transit expansion and electrification. An additional $30 million over 4 years to the Community Transportation Grant Program will mean more money for zero-emission buses and charging infrastructure in areas that are underserved by public transit. Recognizing that small, rural and northern communities also need funding for critical transportation projects, we will increase the Ontario Community Infrastructure Fund by $100 million annually.

Re-establish a stand-alone Minister for Indigenous Reconciliation and restore funding cuts made by the current government, including the $10 million in cuts to culture programs.

Install 2,000 public charging stations across the province with a focus on currently underserved areas. We will also help municipalities install another 2,000 public charging stations through a 50/50 cost sharing program and re-introduce provincial incentives for electric vehicle purchases. Making it cheaper and easier to use an electric vehicles across the province is good for the environment and for family budgets.

Move provincial ministry and agency jobs to Northern Ontario. Relocating government jobs to Northern Ontario is a smart way to localize decision-making and bring some stable, high-paying jobs to communities. These jobs may also mean young people return to communities they left to pursue post-secondary education. To be clear, we cannot solve the challenges faced by Northern Ontario by moving some jobs around, but it is absolutely the right thing to do. Broadband, intercity transit, road infrastructure, an end to chronic homelessness, confronting the opioid crisis, and improving access to physical and mental health care - those are all part of job creation in the north.