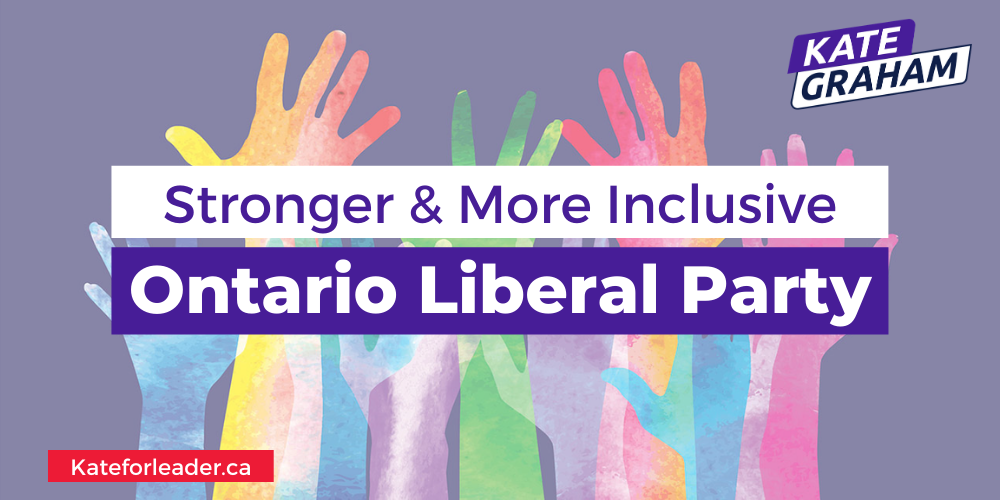 Our campaign is committed to building a province that builds on our party’s strong economic record, while articulating a vision for well-being that goes beyond GDP as our sole measure of progress. In addition to combating climate change, creating more good jobs, and improving affordability, we’re focussed on empowering Ontarians where they live.

Our focus on empowerment must also extend to serious reforms to how our party operates. We must first rebuild the party, then turn it into a machine that can win elections. To deliver on our promises, we need many more people involved in contributing to and communicating our ideas everywhere in Ontario.

To get there, we’ve identified a series of challenges facing the Ontario Liberal Party, and proposed some solutions. Kate heard a lot of these issues during her work with past candidates, and during her listening tour around the province.

Improvement must be constant. We need to hear from party members (and those who might have left or decided not to join the party) about what we’ve missed or how we can do even better It’s going to take all of us working together to get this job done and address the following problems with real solutions.

Problem: Our party doesn’t have enough members to build the grassroots strength we need all around the province.

Solution: Make membership in the Ontario Liberal Party free for anyone who believes in what we stand for and wants to get involved.

Problem: People view the Ontario Liberal Party as an elite and exclusive club. We need to be more open, and more accessible.

Solutions: End delegated leadership conventions, and move to a one member one vote system our members can get behind. 57% of voters at our 2019 AGM supported this change, which would make it easier for more Ontarians to participate in the selection of our leader. We know a majority of delegates at our last AGM, and we have to get there.

Those AGMs are also expensive to hold and expensive to attend. So let's make AGMs regional, not central. We have the technology to join together for important moments, such as hearing from our leader, without asking members who want to feel involved to travel and pay every year has to end. Then, once every four years we would come together as a family.

We also have to commit to fair, open, and transparent nominations. That’s why I’ve launched my pledge to hold nominations that will be fair to whoever wants to compete in them, and why I’m urging other candidates for leader and every member to sign on. Nomination contests are a good test, and we shouldn’t interfere for someone our party elites think is “better” -- or worse, who they’ve promised a nomination to in exchange for their support.

Problem: Even though the election date was set the day after the 2014 election, The Ontario Liberal Party was not prepared for the 2018 election. This was most obvious in that some candidates were nominated right before the writ was dropped, but it’s more than that. We have to be prepared to engage with Ontarians throughout the electoral cycle.

Solutions: We propose holding a minimum of 100 nomination meetings more than 6 months before the next fixed election date. This hard target makes sure the majority of our candidates will be out there pounding the pavement in time to make a real difference. But this is a complex operation, and while we’re committed to exceeding that target, that won’t be enough.

We need to be engaged with, and supportive of, all of our candidates and local associations all the time, not just right before elections. That’s why we would hire full-time, on the ground organizers for each region of the province to grow the party throughout the cycle. This also supports and increases accountability for our local associations. We need to work with those associations to develop measurable targets, provide the support they need to meet them, and then co-develop accountability measures in areas they can control such as outreach contacts and doors knocked.

Problem: In the Listening Project, a campaign post-mortem Kate helped to lead, one of the big themes was that people didn’t know what the Ontario Liberals stood for.

Solutions: In addition to the deep canvassing we committed to above, we’ve got to ensure we are communicating a clear focus to the people of Ontario, year-after-year.

To reinforce this, we should release the platform at least a month before the writ period so people know where we stand.

We must include members and the public in our policy deliberations along the way, by engaging with them on the problems we want to solve (for example, our well-being vision and priorities), showing them the solutions to those problems we’re considering. Then, once we’ve decided on solutions to propose, explain to them how we got there and how we want to be measured on success in the future.

Problem: The OLP relied too much on the existing staff of elected members to run their election campaigns and did not have an engaged core team of activists.

Solution: Hire full-time, on the ground organizers for each part of the province dedicated to the building the party’s grassroots, and reduce reliance on Queen’s Park staff. In addition, charge these organizers with empowering and investing in the capacity of local volunteer organizers through training and technology.

Problem: Our party has, at times, become disconnected from its members.

Solution: Commit to holding town hall meetings in every region of the province, every year, with members, and ensuring our critics and, eventually, members, do the same.

Even when we achieve majority government, winning government without seats in rural or Southwestern ridings only reaffirms old divides.

Problem: PLAs feel powerless and local ridings feel they don't have a say in how the party is run. OLP leadership has lost its value proposition.

Solution: We have to make being a PLA president mean more. That’s why we’re proposing that 6 times a year, PLA presidents from unheld ridings can attend caucus meetings. We need to hear their voices, we need to trust them to keep our confidences, and we need them energized and engaged every day of the year.

Problem: Targeting voters with sophisticated data means that canvassers merely asked folks at the door if they are going to/have ever voted Liberal. This leaves no room for persuasion and is boring for canvassers.

Solution: We also have to make a party-wide commitment to deep canvassing. We cannot come to peoples’ doors, or their phones, or their Facebook feeds, once every four years, to ask them for their support, and then run off no matter what the answer is. We have to find a way to get our local associations, candidates, MPPs, and, most importantly, activists, out there engaging with Ontarians all the time. We have to meet them where they live, and ask them what they want to see from us. Then we have to tell them how we propose to address the problems they have identified. And then, after we’ve put in the work, we need to ask them for their votes. This will not only make us more responsive to the needs and dreams of Ontarians, it's the best way to build our party up with new small dollar donors and activists.

Show your support for this plan!

I support this plan!