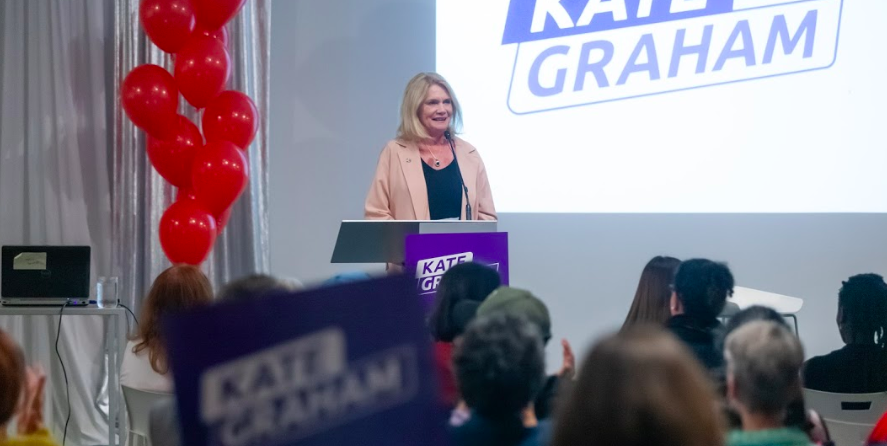 Are you considering becoming a delegate?

When Liberal members come together in early 2020 to vote for the next leader of the Ontario Liberal Party (OLP), they’ll do it first in every community across our great province. There will be votes in each of the 124 ridings, each of the 13 campus clubs, and each of the 12 women’s clubs.

Thousands of Liberal members will vote for the leader they believe in, and they'll vote for delegates: local Liberals who will represent their riding or club at the Leadership Convention in March of 2020.

Indicating your interest in becoming a delegate candidate for #TeamKate is the number one most meaningful way you can participate right now and no experience is required!

Whether this is your first time getting politically involved or you’re an experienced OLP member, we’ll provide you with training (Delegate U!), help you reach out to your community to sign up members, and connect you with other delegate candidates. Successful delegates will stand for Kate at the OLP Leadership Convention in Mississauga, March 6th and 7th, 2020.

If you're interested in registering as a delegate you can register here.

How You Can Become a Delegate for Kate

Want to learn more about delegated conventions? Not sure how you can become a delegate for Kate?

Here are two helpful videos that explain the delegate process and how to get started.

Video 1 - How a Delegated Race Works:

How to Vote in a Delegate Selection Meeting

A Leadership Election Meeting (or LEM) will take place in each of the 124 ridings across Ontario, as well as for each of the 12 women's clubs and 13 student clubs, on either:

Note that only Ontario Liberal Party members who signed up before the December 2 deadline will be eligible to cast a vote at their local LEM for a leadership candidate as well as delegates to the 2020 Leadership Convention in March.

►January 8, 2020: Notice of LEM locations sent out to riding members by this date

► January 17, 2020: Deadline to submit intent to stand forms in order to run to be a delegate at a LEM

Ridings in a given region will all cast their votes on the same day. There will be more information available in the coming weeks on LEM dates and times for each riding. So watch this space.

Rules Around Running as a Delegate

As noted above, to run as a delegate, you must be a member of the Ontario Liberal Party before the membership cutoff at 5pm EST on December 2nd.

Official rules for the selection of delegates for the 2020 Leadership Convention in March (along with rules concerning the broader leadership race) can be found here. Although it isn't required, it is recommend that you at least review this document in its entirety.

However, for the purposes of running as a delegate, the essentials you need to know are:

► If you wish to stand for election as a delegate, you must file a notice of Intention to Stand and Declaration of Support with the Chief Returning Officer or their designate no later than 5:00 p.m. EST on the Friday three weeks before the weekend of the LEM. This would be January 17, so we recommend submitting your intent no later than January 15 to be safe.

► You will need to submit a form that will include a statement indicating which Leadership Candidate you wish to support (i.e., Kate, obviously). You will also have the option to indicate if you wish to stand for election as an "independent" delegate - but since we're the Kate Graham campaign, we strongly urge you to run to support Kate! Look for more information in the coming weeks as to where you can access this form.

► As a member of the Ontario Liberal Party, you can only stand for election as a delegate in one riding. If you attempt to sign up for election in more than one riding, you will be disqualified from running in all of the ridings you where you expressed your intent to run.

More information on the rules governing membership in the Ontario Liberal Party can be found in the following document - Rules of Procedure for Membership.

See section 6.3 (p. 4) in the "Rule of Procedure Governing the Selection of the Leader for the 202 Leadership Convention" document (also linked above) to read the rules in their entirety.

Becoming a Kate Graham delegate is the most effective way you can help open a new chapter in the Ontario Liberal Party.

If you're interested in registering as a delegate you can register here.

If you still have questions, read our FAQ: How to be a #TeamKate Delegate.